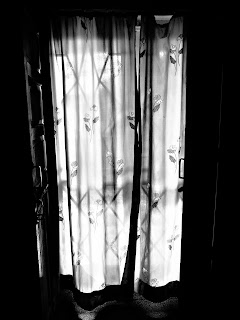 Living inside a little house among meadows,
Seeing the world outside through two windows,
How beautiful did the world seem,
All looked nice, and nobody mean.

One day while peeping outside, a thought came,
Don't know it was a wise one or just lame,
Why not step outside, to breath in some fresh air,
and find out that wavy road, led to where?

Finally stepping  outside, after being home-bound,
Could not stand up on shaking legs, thus crawled to ground,
Got up with difficulty, once who was beguiled,
Again learnt to walk, like a child.

On seeing other people, they were all different,
Outside calm and friendly, inside belligerent,
They just wanted to get their work done,
reap all the wealth of the world and share with none.

What was meant life, behind the curtains was just a game,
Thoughts of players fighting for honour, money and fame,
Overtaking each other, gave them pleasure and bliss,
actually going deeper into a hopeless abyss.

Nerves of their brains, sharper than the edges of sword,
They want to feather their nests, more than they could afford,
Alas, all the cards were disclosed, in the blind fold game,
Kept quiet, but their reputation did not remain the same.

Came back running, towards the warm light,
Entered the little house before shutting the door tight,
Walked to the windows, again to peep outside,
Lives life keeping the three trump cards aside.